Jiu-Jitsu Vs. Taekwondo: Which Is Better for You to Learn? 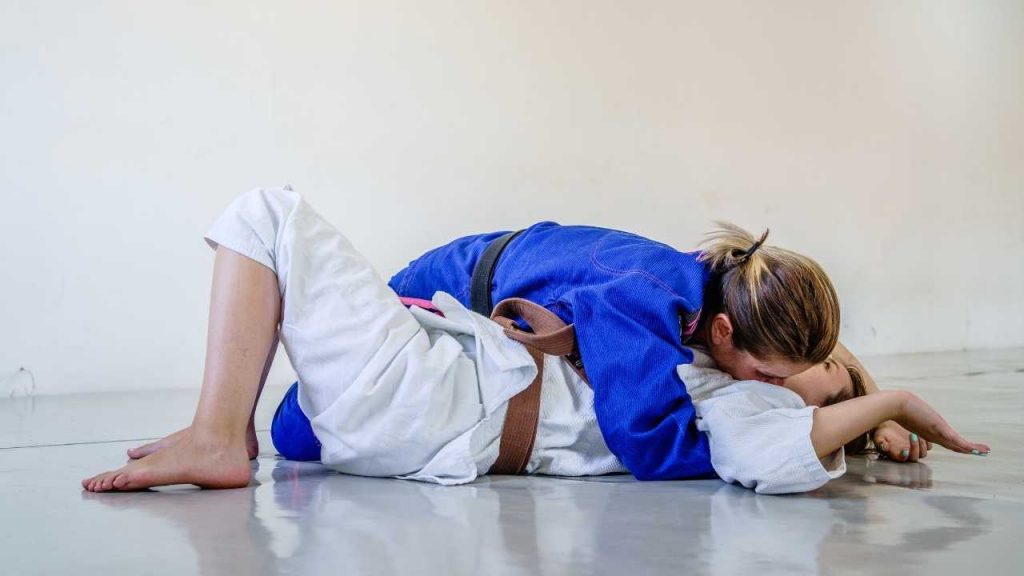 On the old Jiu-Jitsu vs.Taekwondo debate. The rivalry between different martial arts styles is as old as martial arts itself. And it seems like you always get different answers depending on who you talk to.

Well, let’s dive in once and for all to understand the differences between Taekwondo and Jiu-Jitsu. There’s a lot to look at, beginning with their histories and the rules/techniques/gear needed and ending with which is better for self-defense in both street fights and MMA competitions.

Let’s dive in and explore what each martial art has to offer!

Difference Between Jiu-Jitsu and Taekwondo

Jiu-Jitsu has its roots in Japanese martial arts, particularly those used by the Samurai warriors. It began as a form of self-defense to protect against unarmed opponents in close-quarters combat. Over the years it has evolved into an art that utilizes throws, joint locks, chokes, and other techniques to gain control over your opponent without using strikes or kicks.

This heavy reliance on grappling and submission techniques has proven to be quite effective — both in sports competitions and street fights!

Taekwondo, on the other hand, is a martial art of Korean origin that has been around for many centuries. It is said to have originated from the ancient martial art techniques taught by Buddhist monks during the Goguryeo period.

It was developed as a means of defending oneself against attackers using only bare hands and feet. The modern style of Taekwondo was developed after World War II when various martial artists combined their different styles and philosophies to create this powerful discipline.

Where Jiu-Jitsu focuses on grappling techniques and submission holds, Taekwondo’s main focus is on powerful kicking techniques with some punches, blocks, and throws mixed in. It also emphasizes important values such as respect and courtesy — which can be beneficial both for self-defense scenarios and competitions.

The rules of Jiu-Jitsu and Taekwondo vary greatly when it comes to sparring and competition.

Jiu-Jitsu utilizes a points system where techniques are scored depending on the difficulty of their execution. Limited striking is allowed, usually just enough to distract your opponent in order for you to gain an advantage, though strikes are the main technique used in Taekwondo matches.

The main techniques in Jiu-Jitsu are grappling and submission moves such as joint locks and chokeholds. Punching and kicking are still allowed but are not the main focus as they are in Taekwondo.

Check out the updated rules for Jiu-Jitsu here that came into effect in 2021.

Taekwondo has a different set of rules for full-contact sparring with strikes being the main focus instead of grappling. In competitive matches, there are three rounds with each round lasting two minutes or less which allows for fast action-packed fights.

The techniques in Taekwondo consist mainly of high kicks, spinning kicks, combinations of punches and kicks as well as blocks and dodges against incoming attacks. The flashy techniques are fun for spectators to watch.

The techniques learned in Taekwondo can be devastating. Thus, fighters are strictly limited to certain techniques in competitive Taekwondo for safety.

Check out the rules used at the Olympics here.

As we’ve already touched on, the techniques taught by the two arts are completely different.

Jiu-Jitsu was designed as a close-combat style of fighting, whereas Taekwondo focuses on keeping your opponent at bay.

Many of the Jiu-Jitsu techniques are submission holds or grappling moves that allow you to control your opponent. These techniques are very technical and precise and must be executed correctly or the technique won’t have the desired effect.

A big benefit of these types of moves is that they don’t require much brute force. This means they can be used effectively when defending against bigger, more powerful attackers.

Check out this demonstration of Brazilian Jiu-Jitsu to get an idea of what it looks like.

The focus of Taekwondo is completely different. Students spend most of their time learning how to kick powerfully and precisely instead of getting down and dirty with their opponents. The idea is that the legs are the longest and strongest limbs in the body — you might as well use that to your advantage!

It takes time to learn to kick with precision. But once you do, Taekwondo techniques can be used quite effectively to stop or stun an attacker long enough to get away.

Curious about what it looks like? This incredible Taekwondo demonstration shows how powerful these techniques can be.

Both Jiu-Jitsu and Taekwondo use some of the same gear. As with most martial arts, they wear a gi, the traditional martial arts costume, and use belts to signify the student’s rank as they progress.

Because of the grappling and tussling, Jiu-Jitsu fighters often wear a rash guard under their uniforms rather than a t-shirt. This helps prevent scrapes and burns from rubbing bare skin against the floor (or against your opponent). A newer trend is for fighters to wear grappling spats, which offer both hygienic and compression benefits.

Jiu-Jitsu fighters spend a lot of time on the ground, which can be a knee wrecker. Thus, some fighters use knee pads.

In Taekwondo, with its emphasis on striking, more protective padding is used all over the body during sparring. This includes headgear and mouthguards, shin guards, body armor, foot guards, and gloves.

The training areas for both arts are usually equipped with padded floors and various pieces of training equipment. These include dummies for striking or grappling, strike pads and shields, etc.

Jiu-Jitsu Fighter Vs. Taekwondo Fighter In MMA: Who Would Win?

Jiu-Jitsu fighters have an impressive array of submission techniques at their disposal which makes them quite dangerous. However, their forte is close-combat, particularly on the ground. If the fighter is unable to break through their opponent’s defense, they are at the mercy of those Taekwondo feet.

While Taekwondo fighters are incredibly quick and accurate with their kicks, that’s all they’ve got going for them. The Jiu-Jitsu fighter’s goal is to get them on the ground, and they almost always do. Unless the Taekwondo fighter has learned techniques from another martial art, they have nothing to counter with.

In the end, it depends on the skill level of both competitors and how well they use each style’s respective advantages and disadvantages. However, most would generally agree that Jiu-Jitsu fighters have the upper hand in MMA.

Jiu-Jitsu Vs. Taekwondo: Which Is More Effective in a Street Fight?

Again, the stylistic differences between these arts make them both effective in different ways. And there are people on both sides claiming that their art is more effective.

Some would say Jiu-Jitsu could give you an advantage due to its focus on submission holds. You can use these to leave your opponent incapacitated without needing too much force or strength.

However, it takes a certain amount of skill to learn these techniques effectively. Plus, a mental willingness to break the physical bubble around ourselves that we unconsciously like to keep strangers out of.

The powerful strikes taught in Taekwondo can be quite effective in a street fight — even if they aren’t executed perfectly. You also don’t have to get so close to your opponent, removing seconds of hesitation that could make a life-changing difference.

The key to effective street combat is knowing which style works best for you. A solid knowledge of both styles is helpful, making you a more diverse fighter. But if you have to choose one or the other, go with the one you are most comfortable with learning.

Jiu-Jitsu Vs. Taekwondo: Which Is Better for Self-Defense?

Jiu-Jitsu has become increasingly popular as a self-defense martial art and is an ideal choice for anyone looking to learn how to defend themselves in any situation.

The ground fighting techniques give you options for defending yourself when you get knocked down or put into a compromising position. Jiu-Jitsu’s submission techniques give you the upper hand against an attacker, even if they are bigger or stronger than you.

In Taekwondo, the focus is on quick and powerful strikes that can take down an attacker with a single hit. Strategic footwork and distance control allow you to both keep your opponent at a distance as well as gain the upper hand against an attacker.

Proficient students are able to deliver powerful kicks from various angles with precision and accuracy that’s hard to match. The idea is to stop or stun your opponent quickly and long enough to get away.

What’s more, classes in either martial art will help build strength and muscle tone — both of which give you an advantage in a fight. Plus, many martial arts schools teach their students to be aware of their surroundings, which can help avoid a fight before it starts.

Regardless, the techniques you learn from either art will serve you well should you ever need to use them.

Taekwondo Vs. Jiu-Jitsu: Which is Right for You?

At the end of the day, whichever martial art you choose will depend entirely on what works best for YOU — no two people are alike after all!

Taekwondo might be better suited if you want something fast-paced and flashy. Jiu-Jitsu could give you an edge in terms of strategy and technique when dealing with attackers.

Learning either style will help build confidence while giving you some valuable skills that could save your life someday!

If you’re still undecided, why not give both Taekwondo and Jiu-Jitsu a try? You may find one works better than the other for you, or perhaps you might enjoy them both equally.

Since they are so different, learning both styles can be a huge benefit to you. If you are attacked on the street with space to move, you can use your Taekwondo kicks to fend off the attacker. But if you find yourself on the ground or attacked in close quarters, your Jiu-Jitsu moves will serve you well.