How to Tie a Karate Belt Step by Step? 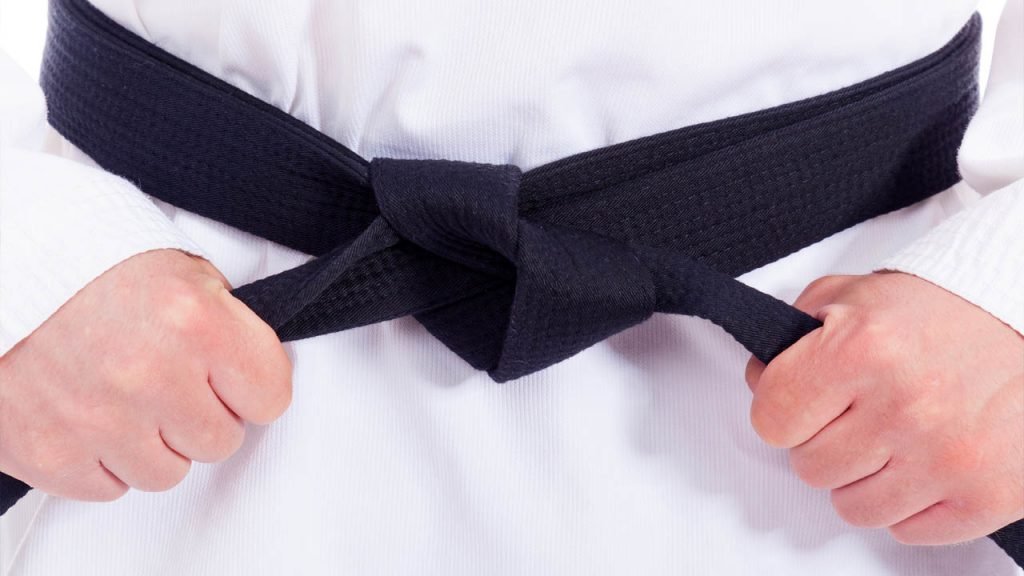 Karate is a particularly rewarding martial art form to study. With a deep, rich history, and equal focus on both the physical and mental aspects of training, discipline, and development, most things in Karate need to be done a certain way. As an integral part of your training, you would have to learn about the traditional Japanese Karate uniform and how to tie a Karate belt.

Here, we will take a closer look at the unique characteristics of the Karate uniform and belt and discuss the steps involved in tying a Karate belt the right way.

The Gi and the Obi

The dogi or gi is the traditional uniform for many martial arts, including Karate. Traditionally, the gi is white in color and comprises three parts: the zubon or the pants, the kimono or the top, and the obi or the belt. The gi is designed to keep the practitioner free-flowing and to allow access to their entire range of motion. Dedicated practitioners of Karate respect the gi and keep it in pristine condition at all times.

The obi or the Karate belt keeps the gi top closed securely. It carries symbolic importance, which is why it is important to ensure that you tie it the right way. Learning to do this the traditional Japanese way can be a testament to your dedication to the art and its essential philosophy. Tying the belt is also a ritual in itself and the discipline and repeatability of the act calms and focuses the mind.

Let us look at the steps involved in tying Karate belt properly. If it’s convenient for you, just watch the video：

The Karate belt is meticulously constructed so that its weight is distributed evenly throughout its structure. The first step of tying your belt involves ensuring that it is properly balanced. This is usually done by making sure that the belt hangs evenly when suspended from its midpoint.

Hold your belt from the middle and suspend it from a height so that two equal lengths emerge from the point where you are holding it. At this state, the belt should be perfectly balanced, both in length and weight. This is symbolic of the concept of shin gi tai, the concept of balancing the technical, physical, and spiritual aspects of the being. It is also symbolic of the fact that Karate entails a balance of the body and the mind. The hand in the middle is in control of the balance.

2. Putting the Belt On

Hold the two sides of the belt and cross it behind your back to form an X at the small of the back. After establishing the contact point behind the body, the two ends of the belt need to wrap again and come to the front of your body, forming another X.

In order to correctly orient the belt during this first step, you need to look for the tag, a piece of material that is attached to one end of the belt. After you have balanced your obi, you need to ensure that the tag is on your right. This way, when you have completed the above steps, the tag remains to your right when you are holding the belt after wrapping it twice around your body.

Once you have formed an X in front of your body after wrapping the belt twice around your waist, it is time to tie the knot. The first step is to tuck the right side of the belt, the side with the tag, under the belt, and to pull the belt tight. While doing this, you need to make sure there are no twists or kinks on the belt.

While holding the belt firmly, you then need to make a loop with the length of the belt on your left side, taking care again not to put any kinks or folds in the belt. Once you are done with the loop, bring the other end down to the front and over the point where the loop closes near the center of the belt. At this point, the tag end of the belt should be hanging over the loop with the tag towards your left.

The act of tying the obi is a fundamental ritual in Karate. There are quite a few symbolic nuances that students of Karate associate with this act. The initial placement of the belt below the navel or the belly button is reminiscent of its association with life. Karate imparts unique skills and lessons that can help practitioners receive and give life. It’s necessary for practitioners to reflect on the moral responsibilities and obligations that automatically come with such a position of power.

Crossing the belt once behind the back and then again at the front also carries symbolic meanings. The former is a reminder that one should always be ready for unforeseen problems and attacks that arise out of place from where they are least expected. The latter is a symbol for the concept of karma, denoting the fact that everything that goes around must come around. It is also a reminder that adversity can come from any direction and you need to be always ready and prepared for it.

The position of the two ends of the belt before the knot is tied orient towards opposite directions. This is a symbolic reminder of the downfall that affects the mind when one does not have inner peace. In such situations, striving for peace and control can help improve both the body and mind, bringing improvement to life itself. Lastly, the proper tightening of the belt is symbolic of the strong determination and tight resolve that need to manifest in order to excel in Karate, and in life itself.

Once the belt is tight, you are encouraged to check if the ends are hanging evenly. However, you should not be disconcerted if they are not. Karate is more about striving hard for perfection than attaining it. That is the most important lesson.

For some people, an action like tying a belt might seem trivial and unimportant. However, in the Karate tradition, it is these little things that matter a whole lot. The entire Karate uniform is brought together securely by the proper tying of the obi. The ritualistic aspect of tying the belt is a testament to the deep symbolic messaging hidden in the act itself. Therefore, it’s critical that an honest and dedicated practitioner of the art learn to master this skill properly.