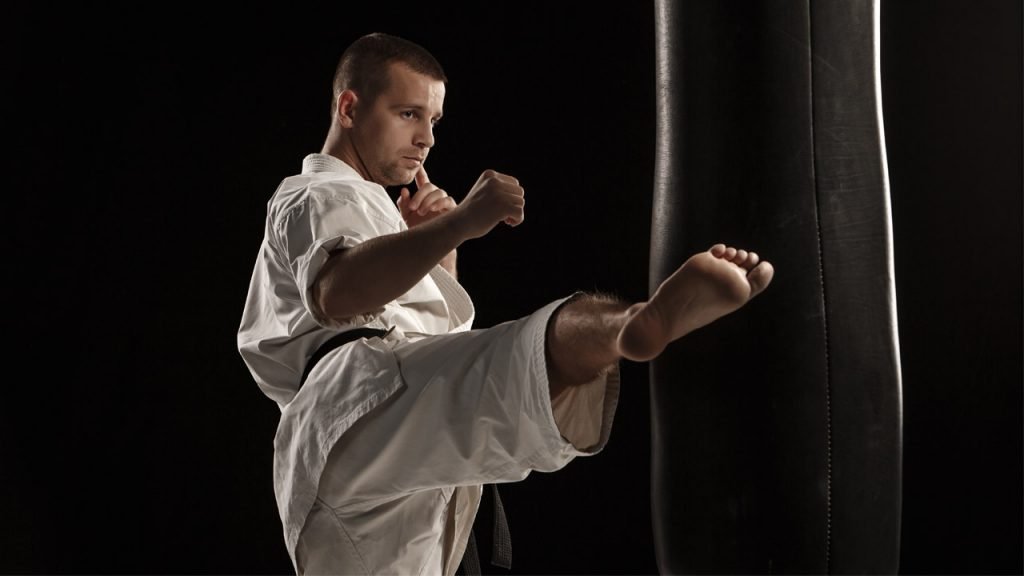 Hiya! An explosive karate kick is a powerful tool in your self-defense arsenal. When done well, you can smash your way through boards and kick your competition out of the ring.

Of course, learning to execute a flawless foot technique in Karate isn’t a walk in the park. If it were, we’d all be running around like Chuck Norris or Jean Claude Van Damme taking out the bad guys left and right.

So, start (or continue) your journey to a catastrophic kick that will decimate your enemies right here with this useful information.

Let’s start out with a quick disclaimer. You can cause yourself a serious injury by kicking incorrectly. For example, you can overextend your knee, break your toes, or even break your leg if you execute your kick incorrectly against a heavy target.

Always begin by practicing your kicks in the air or with a friend holding a handheld target. Once you have a solid understanding of foot and leg position you can practice striking the bag or a heavier object. Start with the basic kicks and move on to more complicated moves as your balance and targeting improves.

Now that we’ve got that out of the way, let’s get kickin’!

The front kick is the most basic and easiest kick to execute. However, just because it’s simple doesn’t mean that it won’t decimate your opponent. A properly positioned front kick to the throat can drop your opponent like a sack of potatoes — and we’re talking about the kind of dropping from which they don’t get back up so use with care.

To perform the karate front kick, begin in a fighting stance. Chamber the kick by drawing your back knee up as high as you can. Higher is better as you’ll reap more power from the movement.

Now, snap your foot straight out in front of you. You can target anywhere from the groin to the head, but the most effective spots will be the groin, solar plexus, and chin. Keep in mind that not all competitions allow kicks to the head.

One last vital piece of advice — pull your toes back tightly and kick with the ball of your foot. Striking with your toes can easily break your toe bones.

You can also perform this kick with the front foot for a snappy kick that can take your opponent off guard. What it lacks in power, it makes up for in speed.

The side kick starts getting a bit more complicated because we’re going to throw a twist in there. Beginning the same fighting stance as for a front kick, this time draw your back knee up toward the opposite shoulder, while twisting on your front foot until your toes are facing away from your opponent.

Again, chamber the knee as high as you can for the most power. Now, explode out of this position. Turn your foot sideways so that you are striking with the “knife” edge of the foot.

You can also use a more advanced version of this kick when you need to cover the ground between you and your opponent. Take two quick steps, back foot then front foot, and execute the kick.

When you get good at these first two versions, you can add the jump for the flying side kick pictured above. As you might imagine, a perfectly placed flying side kick is devastating for your opponent.

Unlike both the front and side kicks which focus energy straight in front of you, the roundhouse kick uses sideways energy to attack your opponent.

Begin in the basic fighting stance. Bring your back leg up and angle your knee in the direction you want to kick. Extend your leg out in a sweeping motion. To help maintain balance, you can extend the same arm as the kicking leg in the same direction.

You’ve probably seen many flashy roundhouse kicks to the head in the movies but beware of this technique. If your opponent is quick, they can duck under your kick and attack your now exposed backside. Additionally, they may be able to catch your leg and you might quickly find yourself on the floor. If you do decide to go high, angle your leg slightly downward, aiming for the spot between your opponent’s shoulder and neck.

Furthermore, you don’t have to kick high to cause some serious damage. Roundhouse kicks to the ribs or thighs can be very effective.

One final point, aim to strike with your shin bone just above the ankle. Striking with the bone causes more pain for your opponent. Additionally, you can break the bones in your feet if you strike a hard surface with the top of your foot.

The crescent kick is a quick kick that serves as a powerful offense as well as an effective defense. From the fighting stance, bring your knee up, extend your leg, and kick in a circular motion as if you were performing the famous “wax on, wax off” motion from The Karate Kid, but with your foot instead of your hand.

The karate crescent kick explodes in a powerful kick to the head. It is also excellent as a defensive move to parry an attack if your opponent thrusts a stick or knife at you.

For a visual of how to do a karate kick, check out this informative video.

Maintaining your balance when kicking is no easy feat, but it is critical if you want to execute, and recover, from a basic karate kick.

The first thing to be aware of is where you’re holding your weight on your supporting foot. While your heel doesn’t need to be up in the air during a kick, it shouldn’t have much weight on it. You can better maintain balance and remain light-footed by keeping your weight on the balls of your feet. This is true for any time you’re fighting but is even more important when kicking.

When you first begin kicking, you may find yourself falling all over the place. The wall or some other solid object is your friend. Practice kicking while lightly touching the wall, but don’t lean on it too much or it will become more of a crutch than a tool.

Train by chambering your kick and holding the position for 30-60 seconds. This will strengthen the muscles as well as hone your balance. As you advance, try chambering different types of kicks without letting your foot touch the ground.

Finally, train slow kicks. Extend your kick and hold it for 5 seconds. If you can do a karate kick super slow, your fast version will be devastating.

A well-executed kick will be powerful, but there is more to the technique than simply making the right motions. You also need to build strength in the muscles as well as employ a few tricks.

You might be kicking with your leg, but the power comes from your whole body, including your breath. Breathe out sharply with the kick to loosen the muscles and add power. In other words, this is a perfect time to use your Kiai. You should also snap your hip in whichever direction your kick is going. This engages your core and the strongest muscle groups in your body.

Once you’ve mastered the technique enough to limit the risk of injury, practice with a heavy bag. You need to know how it feels to strike an object, not just fling your foot through the air. Plus, repeated strikes will toughen your muscles and bones to take stronger impacts as well as strengthen the muscles needed for the kick.

Ready to Ream Your Opponents?

Feeling energized and excited about learning the basic karate kicks? Us too! Honing your Karate kick should be one of your most important training goals. Legs are stronger than arms and these moves are a powerful weapon in your arsenal. These are also excellent long-distance moves to break through your opponent’s defense in a devastating attack.

Looking for more tips and advice on your martial arts journey? Don’t hesitate to check out more of our articles on the Karate Blog!