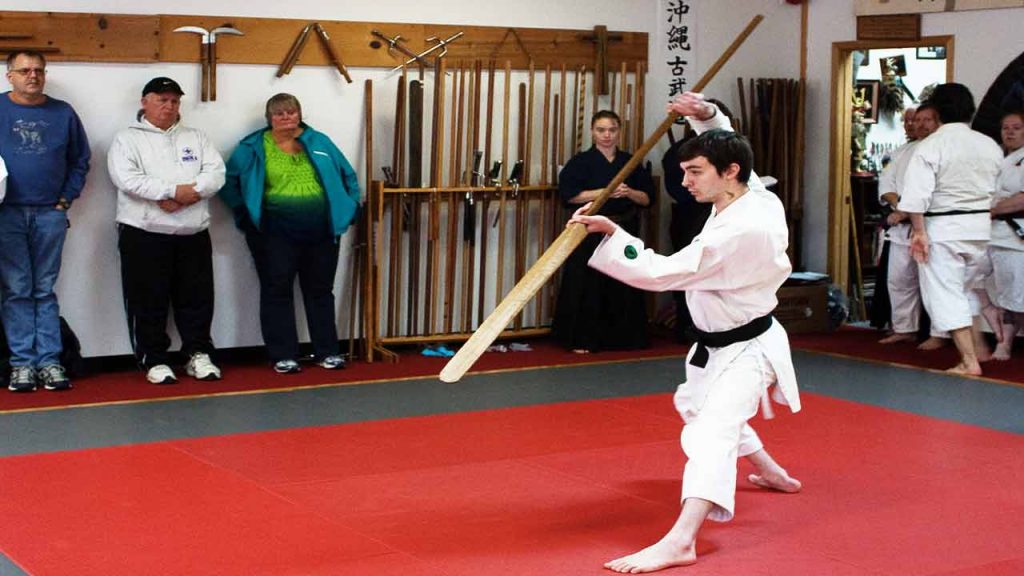 How many martial arts weapons can you name? It’s likely you’d start with weapons like the bo staff, nunchucks, katana, tonfa, and maybe the sai if you know a lot about martial arts.

The eku probably isn’t one that would readily come to mind.

Curious about this traditional martial arts weapon? Learn all about the eku weapon here!

What Is the Eku?

The eku is an interesting weapon used in Okinawan Kobudo, the sister art to Karate that trains with weapons. It is not a common weapon and is typically only used by senior-level practitioners of Kobudo or Karate.

The word “eku” is sometimes spelled “eiku” or “ieku” in English, but these all refer to the same weapon. It may also be called eku bo.

The eku is easily recognizable. It looks like a bo staff with a narrow, elongated paddle on one end, like a boat oar. The whole eku measures between 4.5 and 6 feet long and is meant to complement the user’s height. The paddle part measures 2 feet 3.5 inches long by 3.5 inches wide.

Traditionally, the wooden weapon was made from red oak. However, you might see ekus made of other types of wood including purpleheart or ash.

The History of Eku Weapon

If you’ve read our other pieces on Okinawan weapons (such as the kama), you already know that many of these weapons evolved from farming tools.

The eku is similar but is the fisherman’s version. It looks like a boat oar for a reason, that’s how the eku started out.

Fishermen needed an effective way to defend themselves against bandits like everyone else, but they didn’t have sickles lying around like the farmers. So they picked up their boat oars and started using them similarly to how one would use a staff.

Unlike other martial arts weapons, you don’t see similar versions of the eku in other regions of Asia. Apparently, this weapon is unique to Okinawan fishermen.

Since the eku weapon is more obscure than many of the other Okinawan weapons, it hasn’t undergone much evolution. As mentioned, the eku may be made from different types of wood, but other that than there isn’t much variation.

How to Use Eku?

Many of the eku techniques are similar to those used with a bo staff. But keep in mind, the weapon handles differently due to the imbalance caused by having a paddle on one end.

Having more weight on one end enables the user to swing and strike harder than with a staff. However, the weight imbalance and resulting centrifugal force are awkward to master. This is the main reason why the eku is considered difficult to master and isn’t very popular.

Back in the day, Okinawans got more creative with their use of the eku. It is said that it’s possible to take off someone’s head by striking the neck with the thin edge of the paddle (and enough force). The paddle end was also used to flip up sand into the opponent’s to gain an advantage in the fight.

Various eku kata have survived the years, giving practitioners a strong base to learn this odd Japanese oar weapon. A particularly difficult eku kata to master has the student flicking sand in their opponent’s eyes with both the weapon and their feet.

Needless to say, it requires a certain amount of dexterity and skill to handle this somewhat awkward weapon. Check out this demonstration of an eku kata to see the weapon in action.

Is it Legal to Carry an Eku?

People would definitely look at you strangely if you walked down main street with an eku strapped to your back.

Like many martial arts weapons, the rules about carrying the eku vary from region to region. The best way to be sure about the legality in your area is to talk to local law enforcement.

You can buy and ship eku gear in most places. But remember, just because you can buy any type of martial arts weapon, doesn’t mean it’s legal to carry them around.

Is the Eku an Effective Weapon?

Though it seems ungainly, in the hands of a skilled user, the eku is deadly. As incredible as it might seem, the weapon is powerful enough to take off your opponent’s head when handled correctly.

The eku can also be used non-lethally. Simply change the angle and strike with the flat part of the oar instead.

The eku is not highly practical, especially in this day and age. Unless you’re a fisherman, it would seem odd for you to be walking around with an oar.

In training, however, the eku can be quite helpful. Learning to use an odd weapon like this is an excellent way to improve coordination and speed.

Furthermore, because this weapon is unbalanced, the practitioner develops more upper body and hand strength. The heavier end pulls harder when the weapon is swung, requiring more grip strength to hold onto it.

The eku is uniquely an Okinawan weapon and is primarily used in Kobudo and by a handful of Karateka.

If your school teaches the eku, it doesn’t hurt to take advantage of training with this distinct Japanese oar weapon. The eku might not have much practical use as a weapon, but training with it will certainly improve your strength and form, which benefits you on your martial arts journey.

Curious about other martial arts weapons? Check out our list of Okinawan weapons here for a taste of other weapons you might enjoy learning!