Boxing vs Karate: Which Style Wins? 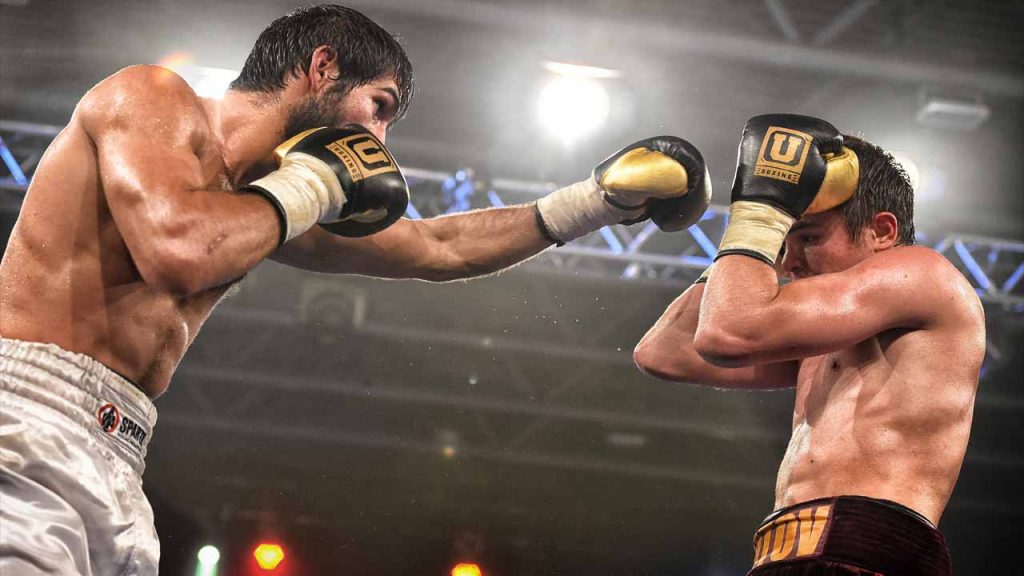 Today we’re going to tackle the differences between boxing vs karate. We don’t expect to settle the debate, martial artists of all types will be arguing about which style is the best until the end of time. But we can give you an idea of what to expect from each sport and how they stack up for self-defense and physical fitness.

If you’re a fan of The Karate Blog, you’re probably already well aware of what karate is. We’ll just give a quick definition here.

Karate is a form of martial arts with techniques based on ancient Chinese martial arts techniques. It was developed for self-defense when weapons were not available, hence the meaning of Karate “empty hand.” The fighting style is very linear, punches are powerful, and practitioners make use of a variety of kicks to devastate their opponents.

Though the techniques learned in boxing can be used for self-defense it was developed primarily as a sport. This combat sport has been around for thousands of years. In fact, a relief from ancient Sumeria in Iraq shows men boxing as far back as the 3rd millennium BCE.

Evidence of boxing with spectators appears all over the ancient world including Ancient Greece, India, and Ancient Rome.

Today, fighters don big gloves and put themselves in a square ring to pound at one another. Boxers rely on punches, jabs, and fancy footwork to decimate their opponents and avoid getting hit.

Differences Between Boxing and Karate

Boxers train primarily with their hands. Footwork is extremely important and how to move is a large part of their training. However, they don’t learn any strikes or attacks with their feet.

This is a big difference between boxing and karate. Karate students learn a plethora of strikes and kicks with their feet that can cause considerable damage.

Because they fight with their hands, boxers tend to stay close. They need to be able to reach their target. A boxer’s punch hits hard and fast and you might never even see it coming.

Karateka, however, will fight a little bit farther away. This gives them more time to react and divert attacks as well as gives them the space they need to fight with their feet. Karate punches are also hard-hitting, but perhaps not quite so sneaky as boxing punches.

Boxing Versus Karate: Which Is Better for Self-Defense?

The techniques from both styles can be used for self-defense. But keep in mind, self-defense is more about situational awareness and mental preparedness than pure technique.

As far as you choosing to learn a style for self-defense, the quality of instruction is arguably more important than the style you choose. A good karate school will help you prepare mentally for a real fight.

Not only will you learn to be more aware of your surroundings, but also you’ll practice being in a stressful situation i.e. full-contact sparring with other students to simulate a fight. Of course, there are plenty of mediocre and even bad karate schools out there that won’t help you in this respect.

The same can be said for boxing. In a good boxing gym, you’ll likely spend time sparring with other people, which will help hone your mental preparedness. However, with less of an emphasis on self-defense, instruction probably won’t include situational awareness topics. Keep in mind, training itself usually improves situational awareness naturally.

The main area that gives karatekas an edge over boxers is the volume of techniques that they learn. While boxers are limited to punches and jabs, karatekas learn a variety of kicks, throws,  and take-down maneuvers in addition to hand techniques.

Who Would Win? Boxer vs Karateka

It’s hard to say who would win in a straight-up fight between a boxer and a karateka. It’s important to note that it depends more on the experience and skills of the individual fighters.

However, if you could say that two fighters were equally experienced, who would likely win?

Karatekas have an edge because of the number of techniques they use. That’s not to say that a boxer will be ineffective against them. A karateka will seek to keep their distance so they can use their feet to their advantage. However, that boxer will get right up in their face and do what they do best. They won’t give them the distance they need to use all those fancy techniques.

Furthermore, a boxer will spend more time training and refining each of the techniques in their more limited repertoire. This is important because you only have to perfectly execute one technique to end a fight whereas a hundred sloppily executed techniques will do you little good.

The verdict: if the boxer gets inside the karateka’s defense, it’s lights out for the karateka. If the karateka succeeds at keeping the boxer at bay, it’s far more likely they will win the fight.

For an extremely interesting and in-depth discussion of how a fight would go down between Mike Tyson and Bruce Lee, check out the video below.

Karate vs Boxing, Who Wins for Physical Fitness?

Some martial arts students are less interested in the self-defense aspect and just looking for a good way to get a workout. Is boxing or karate better for this purpose?

First off, take note that boxing puts more emphasis on physical fitness. You need to be able to move at lightning speed for a long time. The longest boxing fights consist of twelve 3-minute rounds.

To last an entire fight, you have to be able to move with high energy for at least 36 minutes. And we’re not talking a casual 36-minutes workout here. Few people can sustain this type of high energy for more than a couple of minutes.

Though there is less emphasis on physical fitness, you’ll still get a killer workout at any good karate dojo.

Of course, if students stand around discussing techniques for half the class, the boxers have them beat. However, if students are actively practicing techniques and drills, they will get an excellent workout. Furthermore, because of the variety of techniques, they’ll use more of their body and different muscle groups as they train.

Boxing vs Karate: The Best Sport for You

Ultimately, which sport is better for you depends on what you want from martial arts. Each style has its pluses and minuses.

If you are methodical, enjoy more repetition, and are looking for an intense workout, boxing may be the sport for you. If you prefer more variety, mental training, and situational awareness for self-defense, you’ll want to look up karate schools.

Are you curious about the difference between karate and taekwondo? Click to learn all about it!